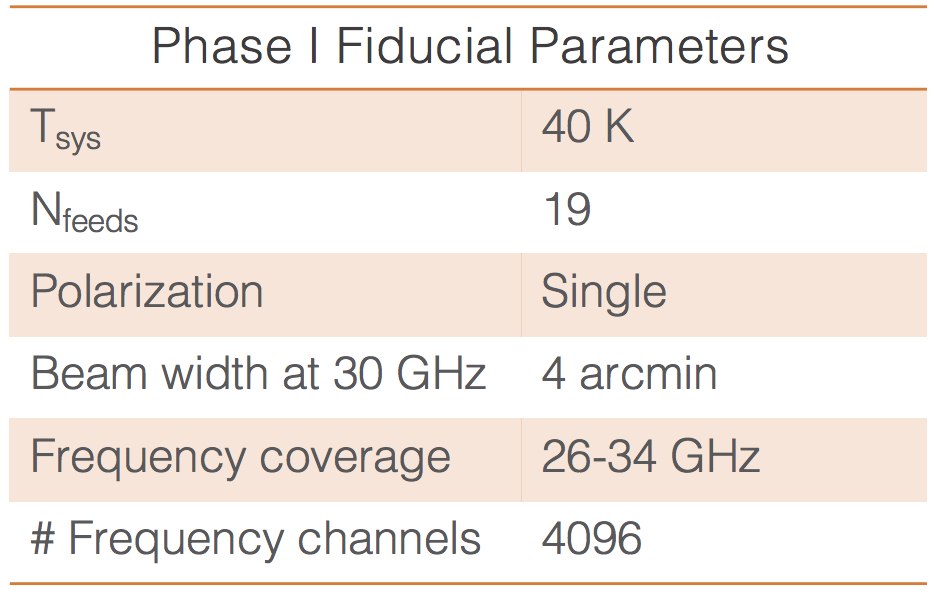 Line intensity mapping is a technique in which, rather than trying to detect individual galaxies, we measure the aggregate emission from all of the galaxies in the line of sight.

Many experiments are performing line intensity mapping using the 21 cm line of hydrogen to trace the neutral gas at the Epoch of Reionization. However, CO has many properties that make it a useful and complementary probe:

It is strongly correlated with the IR emission of galaxies (a proxy for star-formation rate) and this correlation extends to high redshift;

It has been detected in individual galaxies at high signal-to-noise at high redshift;

It emits in a ladder of line frequencies and so, by cross-correlating the emission from lines at different frequencies, we can isolate the signal from foregrounds.

Phases I & II- Probing the Epoch of Galaxy Assembly

In Phase I of COMAP, we will observe from 26-34 GHz with a 19-pixel receiver on a 10.4-m telescope. In this frequency range, we are sensitive to the CO(2-1) line from redshift 6-8, but for Phase I, our main science signal is the much brighter CO(1-0) line from redshift 2.4-3.4. This period, during which about half the stars in the present-day universe formed, is known as the Epoch of Galaxy Assembly.

COMAP is an line intensity mapping experiment: rather than trying to detect individual galaxies at high resolution as in a traditional galaxy survey, instead we measure the aggregate emission from unresolved galaxies in the line of sight.

By using CO intensity mapping of the gas at this epoch, we can provide direct constraints on the relationship between star formation and molecular gas for galaxies that will otherwise be difficult to observe individually. For example, COMAP will constrain the correlation between the CO and IR luminosity of z=2-3 galaxies as well as their luminosity function. These constraints will be determined by probing the faint galaxy population directly and are thus complementary to traditional surveys, which will only probe the brighter galaxies.

The observing strategy for Phase I is to observe two fields selected for low foregrounds and to overlap with optical galaxy surveys. The predicted level of the CO power spectrum varies by over two orders of magnitude, depending on the model assumptions. For the fiducial model, we expect to make an 8-sigma detection over all scales with a total of 3000 hours observing (or two calendar years). Phase II will involve the addition of more 19-pixel receivers in order to improve upon our Phase I detection of CO from z=2.4-3.4.

By cross-correlating with galaxy surveys, we expect to be able to validate the origin of the signal in galaxies at the appropriate redshift as well as making a detection in cross-correlation at high significance. We will place unprecedented constraints on the CO luminosity function and trace the cosmic molecular gas abundance and star formation history at z = 2.4–3.4. We will search for evidence of extended CO emission corresponding to filaments of the cosmic web. Predictions of periodic disruption in galaxy formation from the FIRE galaxy formation simulations will be tested for the first time.

A future phase of COMAP will add a second frequency band (13–17 GHz) sensitive to the CO(1-0) line at z = 5.8–7.9. The cross-correlation of these lower-frequency data with the Phase I observations will be sensitive to the EoR signal, while also providing signal validation and immunity against systematic errors.